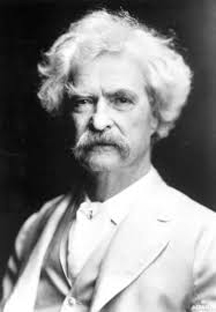 Much has been written about Samuel Clemens, better known by his pen name, Mark Twain. And Mark Twain has also written quite a lot himself. Many people know a great deal about him, but the story behind his connection to Muscatine is not that well known.

Samuel Clemens returned in 1853-1854 from his first major travels as a young man to Philadelphia, New York, Washington D.C and other east coast destinations to Hannibal, Missouri. He found that his family, headed by his brother Orion Clemens, had moved upriver from Hannibal to Muscatine, where his brother was now part owner of the Muscatine Journal, the local newspaper, still in existence today.

His letters home had shown up in print in his brother's newspapers and Mark Twain scholars believe he spent at least a few months living in Muscatine working for the Journal, splitting his time between Saint Louis and Muscatine. Muscatine counts him as one of its most famous citizens.

In his book, Life on the Mississippi, Mark Twain revels in the stunning sunsets he witnessed in Muscatine, writing, “And I remember Muscatine—still more pleasantly—for its summer sunsets. I have never seen any, on either side of the ocean, that equaled them.” When you visit Muscatine, take a little time, go up on the Mark Twain overlook and let the sunsets Mark Twain witnessed take your breath away.

(In 2015, the CVB held a birthday party for Mark Twain downtown at Pearl Plaza, where there's a giant bobble head statue of Twain. The event is intended to become an annual tradition. Check out our blog post and photo gallery about the party to feel like you were there!)