The first gun fired upon Fort Sumter reverberated throughout the whole length and breadth of the land, and was more of a call to arms than the proclamation of President Lincoln for 75,000 men, which immediately followed. There was no lack of response to this call among the Northern States, and no State more enthusiastically and patriotically than the State of Iowa. Men and money were offered without reserve. Volunteers came from all vocations in life, and offered up their lives on the altar of their country. Patriotism was dominant in every heart. Party lines were ignored, and political conflicts were forgotten, and all formed themselves together for the preservation of the Union. 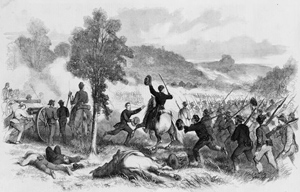 At the onset of the Civil War in 1861, Muscatine men hurried to enlist, sending more men to the conflict than any other county in the state despite the fact that others had much larger populations.

That same year, 18-year-old Shelby Norman of Muscatine was mortally wounded at the Battle of Wilson’s Creek, the first Iowan to be killed in action on a Civil War battlefield. The Battle of Wilson's Creek, also known as the Battle of Oak Hills, was fought on August 10, 1861, near Springfield, Missouri between Union forces and the Missouri State Guard. It is sometimes called the "Bull Run of the West."  Pictured at right is the Charge of the 1st Iowa at Wilson's Creek.

The recorded history of the county reports that in the Muscatine area in 1862 "the excitement of war continued unabated. Muscatine’s loyalty was kept up to the front. The empty sleeves, the crutch, the widow’s weeds, grew rapidly in numbers."

That year, on April 6-7, 1862, the Battle of Shiloh, also known as the Battle of Pittsburg Landing, was fought in southwestern Tennessee. The two-day battle was the costliest in American history up until that time. Both sides were shocked at the carnage and no one suspected three more years remained in the War and eight larger and bloodier battles were yet to come.

"More Iowans died here than in any other battle of the Civil War and April 6 was the worst day in Muscatine’s history, marked by a casualty list that touched every neighborhood and left a legacy of empty chairs and widows’ weeds. [...] Muscatine remembered Shiloh simply because it couldn’t forget, and for 50 years the city celebrated Shiloh Day."


In 1863, Alexander Clark helped organize Iowa's black regiment, the 60th United States Colored Infantry (originally known as the 1st Iowa Infantry, African Descent), though an injury prevented him from serving. (From the 1840s to the Civil War, Muscatine had Iowa's largest black community, consisting of fugitive slaves from the South and free blacks who had migrated from the eastern states.)

Muscatine continued to play a very active role in the Civil War through its conclusion.