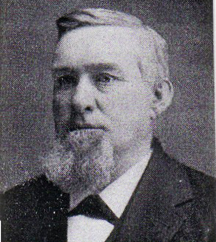 WILLIAM H. HOOPES, a pioneer wholesale dealer and grower of Muscatine Island porduce, is a native of Pennsylvania, and was born at the town of Warrior's Mark, Huntingdon County, on the 19th day of November, 1840. He is the eldest born of Hon. Lindley Hoopes, now a prominent farmer of Lake Township, Muscatine Co., Iowa. His childhood and youth were spent in his native town, and his early schooling was under the tutorship of Dr. John H. Vincent, of Chautauqua fame. When fourteen years of age, William emigrated with his parents from the old Pennsylvanian home to Iowa. The family reached Muscatine in the spring of 1854, where they established their home. The succeeding two years were spent by our subject in attending school at the old brick school-house in the First Ward, where George B. Denison, the present capitalist and banker of Muscatine, presided as teacher. In 1856 he accompanied his parents to High Prairie, in Lake Township, where he assisted in opening up a farm, now the well-known homestead of Lindley Hoopes. Having reached his majority William decided to start in life for himself, and as his advantages for education while on the farm had been limited, he wisely determined to take an academic course at Greenwood Academy of Muscatine, then under the management of J. L. Daymude and Thomas Brown, the last-named gentleman now being a prominent member of the Muscatine County bar. Entering this academy Mr. Hoopes took a two -year course of diligent study, paying his own tuition, and accomplishing more in the way of mental improvement in that time than is often the case with young men who have opportunities of education thrust upon them. It was a matter of business with him, and he accomplished that for which he set out.

On completing his course at the academy Mr. Hoopes made a contract for building a school-house in Lake Township, which contract he satisfactorily carried out, and the following winter he taught school in the building which he had erected. When twenty-five years of age he accepted the position of Principal of the First Ward school at Muscatine, and conducted the school with marked success for two years. He was chosen by the School Board for a third term, which he declined, as he had decided to go into business. He then formed a partnership with his brother-in-law, Martin Bartlett, in the grocery and pork-packing business at Muscatine, and during the continuation of that partnership the firm built the large pork-packing house since utilized by the Musser Lumber Company. In 1872, at the expiration of five years, the partnership was dissolved, and for the next two years Mr. Hoopes confined his operations to the pork-packing business. He then sold the pork house, and purchased a tract of land on Muscatine Island, since famous as the great Island Garden Farm, which is situated on the west bank of the Mississippi, a mile and three-quarters below the Muscatine post-office.

In 1876 Mr. Hoopes formed a partnership with B. Middleton in the shipping of Island produce, to which firm T. B. Holcomb was subsequently addmitted. On the death of Mr. Middleton the firm became Hoopes & Holcomb, which connection was continued until the winter of 1885-86, when Mr. Holcomb withdrew from the business. Joseph E. Hoopes, a younger brother joined him, and the late firm of W. H. Hoopes & Bro. was formed, since which time the business has steadily increased in volume and importance. On the 1st of January, 1889, the firm of W. H. Hoopes & Bro. was dissolved by mutual consent, and Mr. W. H. Hoopes admitted into partnership with him his two sons, under the firm name of W. H. Hoopes & Sons.

To William H. Hoopes is largely due the credit of inaugurating a system of wholesale gardening on the Island, with a view to building up an export trade. Up to 1876, the date of his purchase of his Island farn, the market gardeners of that region had contented themselves with supplying the local demand of the Muscatine market, and the supply was often found to exceed the demand. When Mr. Hoopes made his investment he was asked by one of the leading gardeners what he designed doing with the land, and on answering that it was his intention to grow fruits and vegetables for an early market he was told that the business was already overdone, as the Island gardens were then raising more than the Muscatine market demanded. On Mr. Hoopes replying that he did not intend to put an article on the Muscatine market, but intended to export, he was laughed at as though he was venturing on a rash experiment. Something more than a decade has passed since, and what has been the result of his initiatory enterprise? The report of the Island product exports as published in the Muscatine Journal, Dec. 31, 1887, shows that during that year some twenty farmers of that community were engaged in growing vegetables and fruit for export. Of these only four firms had given in figures on shipments for that year. These were : W. H. Hoopes & Bro.; T. B. Holcomb; C. B. Vail; and J. W. Garnes & Son. An itemized statement was given, which appears in our History of the Island elsewhere in this work. Sweet potatoes and melons constituted the two most important items. There were shipped by these firms seventy-three carloads of sweet potatoes , and 123 cars of melons, which, together with various other products, made a total of 285 cars. Add to this the estimated shipments of the other fifteen farmers, made by a competent person, which is 141 cars, making 426 cars, and to this should be added the shipments of Fruitland, in the same neighborhood, 195, cars, and then fully 100 cars are hauled off by team, which makes a grand total of 721 carloads of garden products and fruit. It will thus be seen that this industry has grown to important proportions, and the resullt has been that Muscatine Island, which only a few years ago was looked upon as only good for pasture land, and not at all a prosperous section of the country, is now the most valuable, best improved and most productive of any portion of Muscatine County. The farm gardens of W. H. Hoopes & Sons embrace 150 acres of rich alluvial soil, situated on the bank of the Mississippi about two miles below the business center of Muscatine City. It is under the highest state of cultivation, and is well improved with commodious and tasty buildings, groves and hedges. The sweet potato is the staple crop of the farm, and storage houses with the capacity of holding safely 4,000 bushels of that luscious edible, are conspicuous features of the place. In addition to their tract, the proprietors operate adjacent tracts to the extent of 310 acres on shares. The firm begins shipping in April with seed sweet potatoes, which are marketed in Missouri, Kansas, Nebraska, and Illinois. These are succeeded by early vegetables and berries in their order; whiile still later come the staple articles, viz.: Tomatoes, cabbage, water-melons, cantaloupes and nutmegs; and lastly comes the crop of sweet potatoes. These Island sweet potatoes are the favorite throughout the West, and the bulk of all these products go to feed the great cities of St. Paul, Minneapolis, and the lesser towns of Fargo, Duluth, Helena, and other towns on the Northern Pacific Railroad, and Winnepeg in Manitoba, Omaha and Denver in the West. The company have headquarters established at St. Paul and Minneapolis, where the senior partner has been in the habit of spending about three months during each year in charge of the business, while the junior members of the firm superintend the home business. In addition to their original plant Mr.W. H. Hoopes purchased eighty acres near Minneapolis, which is successfully cultivated as an adjunct to the main business.

Mr. Hoopes was also one of the organizers of the Island Canning Company, and was chosen its first President. He was one of the incorporators of the Muscatine street railway, and was a director and member of the executive committee of the company until he sold out his interest. He is an ardent Republican in politics, but has never had time or inclination to court the favor of public office. He has so far yielded his preferences as to accept the nomination for Mayor of the city on the ticket of the law and order party, and led the forlorn hope. He has been prominently identified with the Musserville Methodist Episcopal Church and Sabboth-school, where he has served as Trustee and Superintendent.

On the 12th of August, 1869, Mr. Hoopes was united in marriage with Miss Phena Thompson, daughter of Philip Thompson, Esq., of Louisa County. Two children were born of their union, Frank and Fred, the younger sixteen and the older eighteen years of age.
While this sketch is necessarily condensed, sufficient has been said to show that our subject has made a brilliant success of his idea of wolesale market gardening, and while doing a good thing for himself, has by example and success led others into a line of business that has made the once despised flats of Muscatine Island to blossom as the rose, and spread its fame far and wide throughout the country.

As a representative of that class of wide-awake business men of which Muscatine furnishes more than one good example, we give the portrait of Mr. Hoopes upon another page of this work.